BARD OF MARS contains the first poem to be published to another planet, currently orbiting aboard NASA’s MAVEN spacecraft, chosen for this honor by worldwide internet vote as well as the team of MAVEN scientists.

Professor Sara Seager of MIT has penned the foreword:

“Astronomy (celestial objects, space and the physical Universe) is full of mystery and beauty. Some of the mysteries, such as how galaxies, stars and black holes came to be, are solved or are being solved, while others, such as dark matter and dark energy, remain stubbornly elusive. The astronomer’s work to solve problems and describe the contents of the Galaxy and Universe can be dry and rigid. Which is why we turn to art. In its many forms, art can help to draw out the hidden aesthetics of astronomy while at the same time communicating fun, excitement, and even the nonsensicalness of some troublesome puzzles in the cosmos.

“Bard of Mars is a poetry collection that spans a tremendous array of astronomical topics, including the multiverse, the expanding Universe, galaxy collisions, light travel time, the Milky Way, hidden dimensions, black holes, dark matter, dark energy, stars, planets, asteroids, particle physics, symmetry and more. The poems are factual and flow logically, yet joyfully convey the fascinating, intricate threads between and among the cornucopia of objects in our Universe.

“Some poems are humorous, showing a lighter side of astronomy. Others tell a more detailed story about a complicated concept or a case of misconceptions and misunderstandings. What I like best about Bard of Mars is how the poems artfully embrace the craziness of what is out there — the oftentimes jumbled and incongruous theories of space that astronomers and physicists have proposed.

“Jim Kotsybar’s tremendous enthusiasm for space astronomy shines through his poems brightly. A few of his most accomplished poems are celebrated, having been chosen to orbit Mars, become part of Hubble’s mission log and highlighted in magazine competitions.  Overall, the poetry collection succeeds in describing astronomical topics factually, while conveying the breadth, depth, and mysteriousness of the contents of our Universe.” 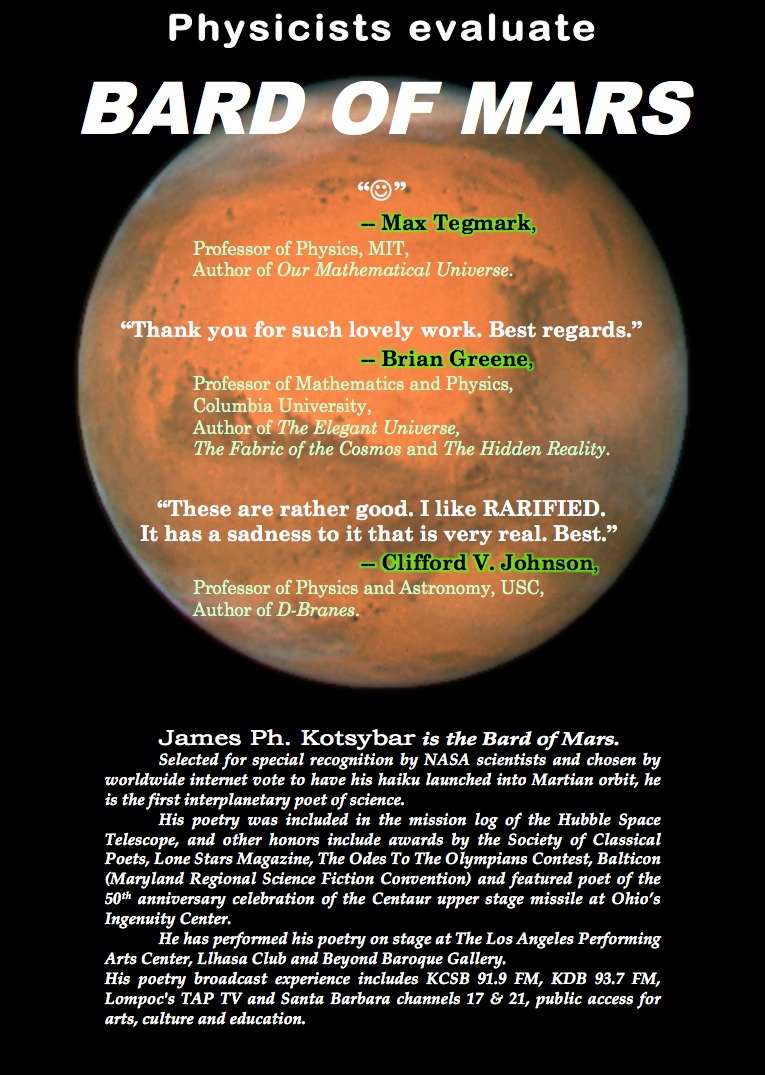 2 thoughts on “About The Book”