In 1977, a recording of “Liu Shui” (流水; Stream), as performed by Guan, was chosen to be included in the Voyager Golden Record, a gold-plated LP recording containing music from around the world, which was sent into outer space by NASA on the Voyager 1 and Voyager 2 spacecraft. It is the longest excerpt included on the disc (lasting seven minutes and 37 seconds) and the only excerpt of Chinese music.

Voyager 1’s “The Sounds Of Earth”

Eleven billion miles from the sun

a record, golden when it left these parts,

a runaway hit on Voyager One,

at Ophiuchus, sure to top the charts,

will introduce Mozart to other stars,

not to mention Berry’s “Johnny B. Goode”.

The knock-offs sold in alien bazaars

will knock their socks off or at least it should

make them extend their eye stalks in surprise.

They’ll soon begin to learn to sing along

to whales, recorded, and the baby’s cries —

Should Beethoven not prove to be their fave, 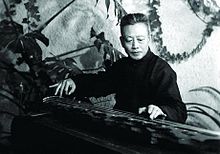 Then Guan PingHu’s GuQin could be their rave.